Eating away a Disorder

According to the CDC almost 40% of adults over the age of 20 are considered obese. Obesity is defined as having a body mass index (BMI) of 30 and above. Obesity remains the leading cause of heart disease, diabetes and certain types of cancer. For many, weight gain is a result of medical issues or a side effect of medications. 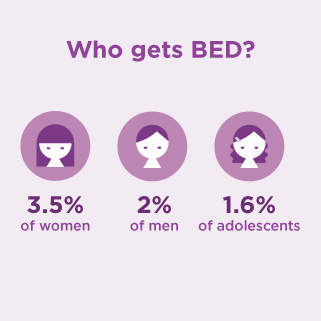 For others it could be due to disordered eating behaviors that include stress eating, eating when full, eating in secret or feeling loss of control while eating. Emotional eating is the act of using food to satisfy one’s emotional needs rather than to satisfy hunger. Most people identify as emotional eaters, after all, who hasn’t come home from a hard day at work and wanted to eat pizza or sat down with a pint of ice cream after a break-up?

Although this might sound like binge eating, it is very different from an actual diagnosis of Binge Eating Disorder (BED). BED is characterized by out of control eating that occurs frequently, is out of control and leaves a person with intense feelings of guilt and shame. BED occurs when a person eating an amount of food not normal for them in one sitting, at least twice a month.

In a binge episode, people tend of eat thousands of calories of highly processed foods (e.g. pizza, fast food, ice cream, candy, cookies), rapidly, in secret and until they are uncomfortably full (even then some). People tend to use the term “binge” to describe over eating, but BED is an eating disorder that needs to be addressed by a multidimensional team of professionals like a medical doctor, dietitian and a therapist.